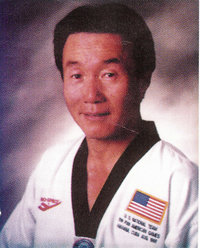 One of the Founding Father's of Taekwondo in Indiana and the USA.

GrandMaster Yoon has over 40years of Teaching Excellence.

Has Promoted over 2,500 BlackBelts as Founder of KTA (Korea Taekwondo Academy) based in Indianapolis, Indiana.

Dr Kwon is one of the Founding Father's of TKD in America and Internationally.

Recognized WorldWide in his Leadership and the elevation of TKD as an Olympic Sport.

Member of the WTF Kukkiwon testing Board.

Dr Kwon has a tremendous list of accomplishments and awards as he has been a great Mentor for Master Washington.